How to Win at Speed Dating

Marriage Counselor
get their attention, hitting on a woman at a bar, how you get her number, meet your soul mate, Speed dating 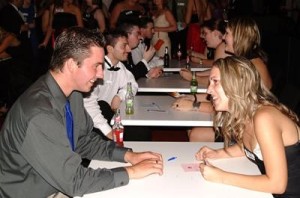 “A speed dating session in progress at Washington DC”

At first glance, you may be confused. Speed dating doesn’t seem like something you win. It’s not a contest in the traditional sense; no prizes are awarded at the end of the night. Nobody goes home with a certificate or a trophy for best catch. And yet there is a winner at the end of the evening: the guy who takes home the most contact info for women he’s interested in. That’s what you paid money for, and why you spent your evening there. Your goal at a speed dating event is not to meet your soul mate, it’s to find someone you wouldn’t mind going on a real date with. Keeping that in mind, you should understand that yes, you do want to win at speed dating. You want to leave with the most potential dates. 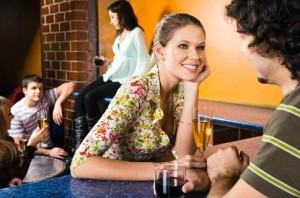 “See if you have some common interests”

To start, make sure you put the mingling period at the beginning of the night to good use. Get a good look at the other men who are your competition. Your goal is to stand out from the crowd, so get a sense for what “the crowd” is. Do they seem to be football fans? Businessmen? Did someone recommend a whole nerd club come out for the evening? It’s never one hundred percent, of course, but there does tend to be a type, so you can use this to your advantage by making sure you present yourself in such a way that you stand out from that type of guy.

Don’t stand out too much since there’s usually a reason that people are at these events. They’re usually advertised to a specific population, one that includes both men and women. Those women will be looking for someone in the general vein of those men, most likely. You can use your keen, observing eye to decide what aspects to put forward to get their attention.

When You’re Going Around

Once the dating rounds start, make sure you’ve got your best game on. Smile, shake hands with exactly as much pressure as she gives you. Ask her questions that also tell her about you. Make sure you catch her name, and use it a hand full of times so she knows she’s not just a blur before you move on to the next woman.

You don’t have much time to make that impression here, but don’t let that scare you. When you’re hitting on a woman at a bar, you have a far smaller window to make a good impression when you think about it. When you’re speed dating, you have her undivided attention for five or ten solid minutes. Use this to your advantage.

Other than that, it’s the same game you always play with women, so nothing should be appreciably different in this situation. It’s tempting to over share in this kind of environment because the pressure is on to get to know each other in such a short window. Remember that you want to leave her wanting more of you, and that’s how you get her number at the end of the night.