How to Use Nipple Clamps 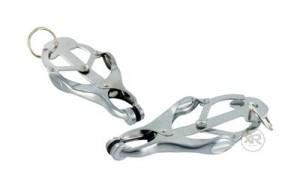 Nipple clamps may seem like something that only the truly kinky use in the bedroom, but if truth be told, they aren’t really all that kinky. Of course they’re unusual but not more than the restraints or a flogger, which are quickly becoming more common on the bedroom scene. Something that does separate nipple clamps from floggers and restraints is that you have to have some base knowledge to use them. There’s nothing stopping you from just grabbing some Japanese clovers and going to town, but if you or your girl wants to bring them around another time then you have got to be smart about using them.

When it comes to buying some nipple clamps, quality counts. While they’re supposed to hurt a bit, they’re not supposed to rip off the nipples or seriously damage such beautiful parts of a lady. A cheap pair of clamps could end up ruining the mood by slipping off (while pinching the nipple in a very unpleasant way), breaking, or not closing tight enough. Investing a good amount of cash into a pair of clamps will ensure that you can have some control over the pressure applied to the nipples and how long they’ll last you. Just the right amount of pain can have her reeling from simultaneous pleasure.

As with many sex toys, start at the beginning. Just like you wouldn’t want to try to start anal stretching with a traffic cone you don’t want to use too strong of a clamp on the nips (yours or hers). Earlier price was mentioned, but when you’re starting out with nipple play it’s actually going to be pretty cheap because honestly all you’ve got to do is get some clothe pins. Clothe pins are inexpensive, easy to find, and inconspicuous. While they might seem to be a bit strong, they do wear down the more you use them so you can customize how tight they’ll bite. Start off by wearing them for no more than five minutes at a time; too long can cause some damage to the nipple skin. If clothes pins just aren’t pretty enough for you, stop by your local sex shop and purchase a pair that have screws on them. With the screws you’ll be able to completely control how much pain is good for you. Unlike the clothes pins, these do take a minute to get off if things get too intense. 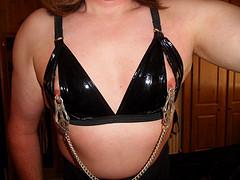 “Nipple clamps come with chain and can be worn like this”

After you’ve got down in nipple clamping, take a step up to some more professional style toys. Japanese clovers are known for their vicious bite and beauty, but are not for beginners. They go on like clothespins, but are much stronger and actually get tighter if you pull the chain attached to them. A step below them would be simple style clamps with rings that can be moved up and down to make them tighter or looser. The only issue with this style of clamp is that if you or your woman have smaller nipples, it’s going to be hard to get them to stay on.