Getting Her Interested in Your Mind as Well as Your Body

Marriage Counselor
creative ways to spend your time, get to know her better, long-term goals, sex without strings, start an argument

“Make her want you more”

It’s easy to form relationships based on mutual sexual interest. Lust is one of the basest emotions and it’s easy to operate on that alone. However, there may come a point in life where sex without strings starts to lose its appeal. You may find that you start to crave an actual relationship instead. If you have been playing the field for a long time, it can be hard to transition your point of view over to committed relationships. Where once you picked up women because they wanted you sexually, you’re now looking for women who value your mind just as much. It can be a difficult switch to make. Getting a woman to see you for everything you offer instead of just a body to sleep with can be tricky. We’ve compiled a list of tips you can follow in order to make this change a little easier.

This is the most obvious step to take. If you want to find a woman you can establish a relationship with, you need to stop acting like a playboy. Instead of flirting in a manner meant only to get her into the sack, start flirting with your long-term goals in mind.

When flirting, ask her about her past, her interests, and what’s important to her. Make conversation matter instead of making it just an icebreaker until you can get into her pants. By showing her that you’re genuinely interested in what she has to say, you’re proving that you’re serious and respectful.

Once you know she’s interested too, don’t jump right into sex like you normally would. Instead, ask her out. Take some time to get to know her better before you take things to bed. If you take the time to build a foundation; she’ll know she means more to you than just being another sexual conquest. She’ll develop new levels of respect for you and your actions.

Don’t Shy Away from Conversation 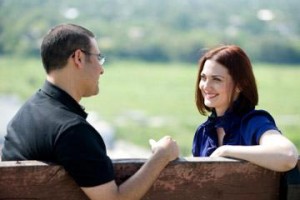 “Be open in your communication”

The best way to know someone is to talk to them. In a relationship, it’s important to share how you feel with each other, this includes topics that might be hot-button or controversial. Discussing difficult subjects can grant you even more insight into each other, which builds stronger ties. If these topics become heated, take steps to bring them back into neutral territory; you’re not trying to start an argument. You’re trying to prove that you’re capable of serious discussion and that you’ve got more than just sex on your mind.

No, not indefinitely! If you’ve already slept together and you find that your relationship seems to be revolving around sex and sex alone, it’s time to take a step back. If you’re truly interested in a relationship with her, you need to see if she’s capable of wanting you just as much for your mind as she does for your body. Start looking for other creative ways to spend your time. Plan fun and adventurous dates that play up to her interests. See if you’re capable of enjoying each other’s company outside of the bedroom.